Whether you are accustomed to seeing ” the white cladded Yogis” swiftly turning in and out of the yoga postures with “loud Mantra-Chantings” or just came across a Kundalini Yogi. If you are really curious about knowing what is Kundalini Yoga, this post may be an eye-opener for you.

Firstly, even though certain schools of Yoga focus their whole dedication to ‘Kundalini’, in reality,

The entire subject and practice of Yoga is actually about Kundalini.

The whole issue of Kundalini revolves around the principles of Shiva and Shakti and their relationship and interactivity.

Shiva is the static, unlimited potentiality of the Universe (Multiverse) (Spirit) and Shakti is the active materialization into myriad forms of that potentiality.

(Materia) Swami Janeneshvara of the Himalayan Master tradition uses a fabulous analogy of ‘ink’ and a ‘writing pen’ to convey Shiva and Shakti – millions of words (forms) can be written with only one medium – ink! (Shiva)

The literal meaning of The Kundalini 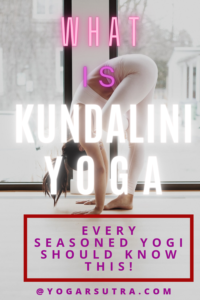 The word ‘Kunda’ means bowl or cave. This refers to the potentiality of our ‘Being-ness’.

The word ‘Lini’ refers to what is in that bowl – our current level of perception and understanding and spiritual knowledge and experience.  (awareness as light)

The word Shak is the root word of Shakti, and means ‘to be able’, or to ‘have power’.

Hence, ‘Kundalini Shakti’ is the power of the knowledge of consciousness that is coiled in a latent form, in the ‘bowl’.

“Yoga is the process whereby we attain the ultimate potential of the Kundalini Shakti – the dance of Shiva and Shakti united. (Kaivalya)”

So, the practice of Yoga can be seen as two-fold: the information and experience about the bowl – this is beyond simply our physical body but also includes the entire ‘layer’ of our world.

Secondly, the contents of the bowl  (current consciousness) – our Soul with its components of Heart, True Mind and Spirit (Atman in Yoga)

The Mysticism Surrounding The Kundalini Yoga

Much awe and mystique and coveting, surround the fabled ‘Kundalini experience’ where it is said that we can unleash electricity like energy up our spine that should reach our Crown Cakra and result in a burst of radiant spiritual light and glory and usher us into the higher spiritual realms of Ananda and hopefully Kaivalya too!

From my own perspective and experience, consciousness and spirituality are synonymous. Therefore whatever energy is involved in these realizations, is natural and intrinsic energy.

In other words, we do not ever have to go off seeking energy experiences, and to do this for the sake of having said experiences is utter folly and can very easily lead you into very serious trouble indeed.

Subtle energy channels (Nadis) that are not ready to receive a large charge of energy can literally ‘rupture’.

“As a result, we could incur physical damage to our nervous system and even worse, if neural pathways are unnaturally forced and damaged, we may go crazy!”

This all said the spine in our physical body with its electro-magnetic vortices is absolutely a super-antenna that we all have as the core of our psycho-physical being.

The problem is that we cannot ever move faster than our current level of ‘realization’ in consciousness.

Physical practices such as movement and breath along with mantra chanting and various Bhakti and Kriya, are meant to be supportive methods for Contemplation, Meditation and Yoga Nidra, which of themselves are also still not the target – the target is union with Purusha, the ultimate Megha-samadhi realization of original ‘Self’ – Yoga – Union with the ultimate cosmic consciousness, Purusha, Divinity!

So all practices, including specific Kundalini awakening exercises should aim to support Self-Realization and that is all.

Downsides Of The Force Full Self-realization

When we try to force Self Realization via ‘forced’ exercises and mantras we run the grave risk of ‘smashing our own head’ with a big hammer so to speak, or if we are lucky, emulate a fly batting against a windowpane. (meantime there’s an open window just a foot away to the side)

When we achieve Realization grounded and anchored and rooted in consciousness, no hammer is needed whatsoever. (in fact, you could be just sitting quietly under a tree drinking your vegetable juice)

Realization is completely natural and the flow of ‘kundalini energy’ that runs through our entire being via the unity of our spine, is like the experience of being hot and thirsty after a long hike in the mountains (life) and then coming to a cold crystal clear mountain stream and then drinking from that exquisite, pure water.

We feel it coursing through our every cell and flooding our entire bodies with wonder and joy and the very life essence itself. (so not to mistake this experience with simply having a healthy, vigorous physical body)

Summing Up- What Is Kundalini Yoga

So this is not to say that impressive and even transcendental ‘energy’ experiences are not possible, they absolutely are – but we need to be careful not to confuse various kinds of energetic charges that exist in the Universe with Self Realization or even Ananda.

The true experience of Ananda will always accompany the “True Self Realization” anyway.

I would also say that true Self Realization and therefore the true Yogic Kundalini experience occurs beyond the three states of waking, dreaming, and deep, dreamless sleep – so this ‘third point of reference’ (state) is only to be aligned within a specific band of consciousness and associated ‘Realization’, found only within a specific quality of Deep Meditation (Samhadi with Atman)

How different is that to practicing on and on for something always in the future sometime as we psyche ourselves up with raised arms and breathwork and rolls . . .

So yes, the spine is a superconductor antenna. But we are the arbiter of our own consciousness.

If there are skeletons in the closet – which we all have in abundance, I assure you, then those are ours and will be ours until such time as we have genuinely changed our consciousness.

We can chant and roll and breathe and eat lettuce forever,  and this will not bring us one step closer to Self Realization.

Those, along with all the various facets and approaches are good tools and assistants for our quest – however,

You will entirely miss the point and join the legion ranks of fashion and fad as you entertain a bunch of very expensive, time consuming empty spiritual promises.

Furthermore, if you do manage to align fabulous energy charges and even beautific, blissful realms, be careful – this too is unlikely to be Self Realization.

Paul Carlos is the founder of Sacred Spiral Yoga School, an accredited Yoga Teachers Training provider with Yoga Alliance International. Paul has been involved with Yoga and other disciplines for the last 35 years and is further a musician focusing on sacred and classical music.

Get in touch with Paul Carlos: