Lots of excitement and enthusiasm can be felt inline with the approaching International Yoga Day. Yoga circles, creators, and mentors are buzzing with the new activities. And when time demands huge,  my nerves start to fire so much so that I find it almost impossible to keep up with the pulsating ideas of doing something phenomenal 😊 . But this time, instead of bowing down and surrender (to nothing), I am up to 108 Sun Salutations Challenge on World Yoga Day. 108 Sun Salutations in one go! Surprisingly I never tried even 30, 20, 10, even 5 altogether. 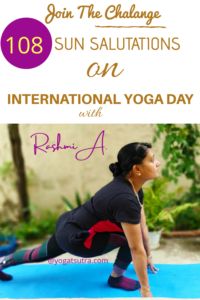 If you have never come across the term sun salutation, no problem. Sun salutations are actually a way to pray and bow to the life-nurturing powers of Sun. Since our existence on the planet Earth is solely by the virtues of the ‘Super Solar Powers’. Through Sun Salutations we can express our gratitude for the supreme known and recognizable life force- The Sun. Before diving into the 108 Sun Salutations Challenge, I want you to understand the importance of doing it. Number 108 has special importance which I will describe in the coming sections. 108 Surya Namaskar is performed on solstices and Equinox to observe and welcome all seasonal and environmental changes.

However, you cando 108 Sun Salutations when you want to bring major changes in your life but lacking in the motivation, inspiration, and the much-needed drive to change. A drive to change the circumstances, to revive the things which no more serve you.

Why International Yoga Day Is Celebrated On 21st June 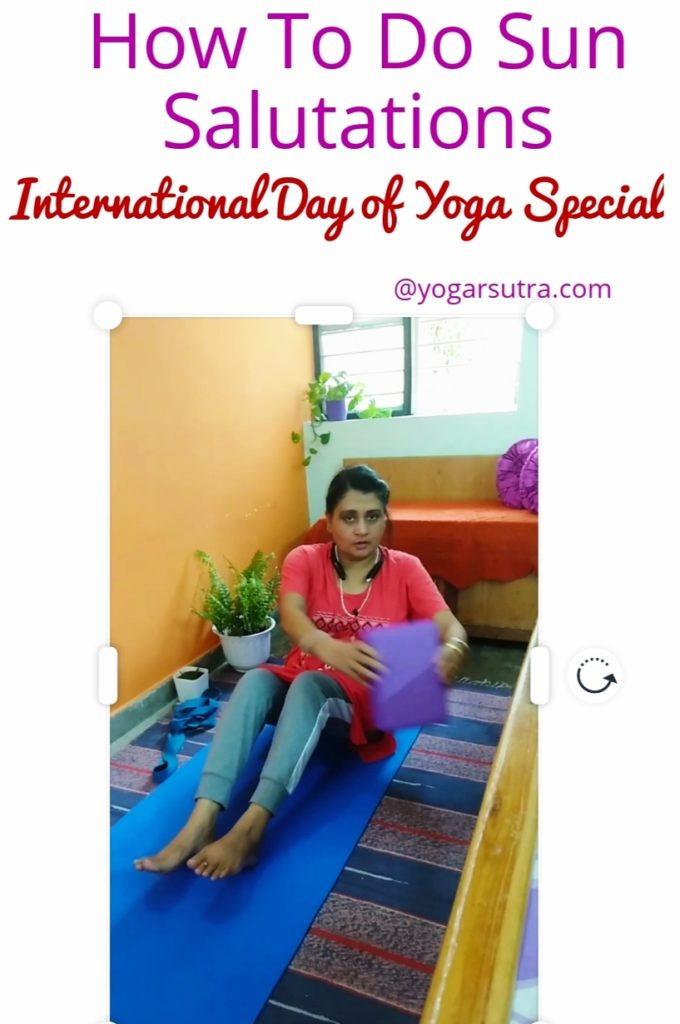 Before moving to our challenge, a little bit about the world yoga day–

This date is the longest day of the year in the mass northern hemisphere (shortest in the southern hemisphere), having special significance in many parts of the world. From the perspective of yoga, the summer solstice marks the transition to Dakshinayana.

The June solstice holds a special place of celebration in many cultures. People around the world celebrate the day with feasts, picnics, dance, and music.

The second full moon after summer solstice is known as Guru Poornima. Shiva, the first yogi (Adi Yogi), is said to have begun imparting the knowledge of yoga to the rest of mankind on this day and became the first guru (Adi Guru).


About Solstices And Equinox

P.S.- Can skip this section at all if you are not interested in Solstice and Equinox and head to -Science Of 108 Number- The Universal Existence

You may have heard that the solstices and equinoxes signal the changing of the seasons on Earth, but do you differentiate the two? Are they just different names for the same thing? Actually, a solstice and an equinox are sorts of opposites.

The seasons on Earth change because the planet is slightly tilted on its axis as it travels around the Sun. This means different points on Earth receive more or less sunlight at different times of the year. If Earth were not tilted, the Sun would always appear to be directly above the Equator, the amount of light a given location receives would be fixed, and there would be no seasons. There also would be no need to mark equinoxes or solstices.

The two solstices happen in June (20 or 21) and December (21 or 22). These are the days when the Sun’s path in the sky is the farthest north or south from the Equator. A hemisphere’s winter solstice is the shortest day of the year and its summer solstice the year’s longest. In the Northern Hemisphere the June solstice marks the start of summer:

The equinoxes happen in March (about March 21) and September (about September 23). These are the days when the Sun is exactly above the Equator, which makes day and night of equal length.

So, in the Northern Hemisphere, you have

Science Of 108 Number- The Universal Existence

Before jumping to 108 Sun Salutations challenge let’s understand the science behind the number 108. It is not any arbitrary or ordinary number. The number is esteemed mystifying and can very well depict the union between microcosm and macrocosm.

Note- the number 108 may vary accounting for orbital fluctuations and gravitational forces. There is nothing absolute perfection in nature and universe which is too vast to measure and calculate.


What You Need To Complete 108 Sun Salutations Challange

Ok back to the challenge. That said 108 sun Salutations equal 108*12= 1296 yoga poses in one go. Seems really something unrealistic? And why not…

If you are regular with yoga, how many poses you might be doing in a regular practice. 20, 30, 40…Ok, this is my limit. This is where I have to take a halt because of the time and stamina both.

Flow Or Something phenomenal

“The holistic sensation that people feel when they act with total involvement.”

In positive psychology, a flow state, also known colloquially as being in the zone, is the mental state in which a person performing an activity is fully immersed in a feeling of energized focus, full involvement, and enjoyment in the process of the activity.

People regular with this also admit that completing the first half of 108 is much difficult than the second in which they attain the required flow. This is when they overcome the challenge of physical and mental inertia.

Surya Namaskar is the most versatile set of scientifically selected yoga poses- a yoga cycle comprising 12 yoga postures. This is considered as the most energizing technique of yoga because it influences most of the body organs-internal as well as external. These are only a few of many benefits of doing Surya Namaskar every day-

All bending, folding, vinyasa, and mindful breathing you do, does wonder to your digestive system which is a key to great metabolism.

Doing one round of Surya Namaskar burns approximately 13.90 calories. However,  age, how active you are doing, are also some of the deciding factors When you are eyeing Sun Salutations as a solution to your weight loss.

It increases the flow of blood in the body and the regular practice of Surya Namaskar develops strength, stability, and the flexibility of mind and body.

This is what we all are craving for in the current scenario! But it mostly depends upon how well we eat, rest, remain mindful to stay calm and stress-free.

The de-stressing powers of Surya Namaskar, strengthen your immune system and keep illnesses at bay.

The solar plexus is the central point of the human body. It is just behind the navel and connects with the Sun. This is the main reason why we must practice Surya Namaskar when the sun is still rising in the morning. The regular practices of Surya Namaskar can boost solar plexus. Which results in increased vitality, confidence, and brain functioning.

How to Do Sun Salutations 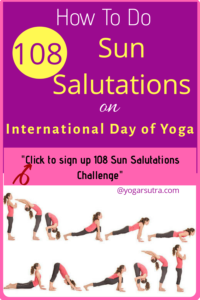 सूर्यनमस्कार  or Sun Salutation is a Yoga practice incorporating a sequence of gracefully linked asanas. The nomenclature refers to the symbolism of Sun as the soul and the source of all life. Its root is in India where there are many worshippers of Surya, considering  Sun as a deity. 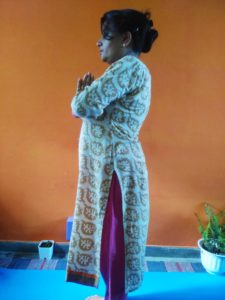 Best known as prayer pose, Pranamasana is the first pose of the Surya Namaskar. 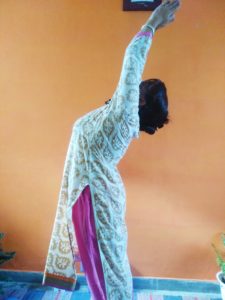 Hastauttanasana loosens up your body by stretching the entire body backward while options of standing at the tips of the toes. 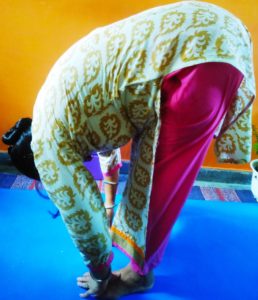 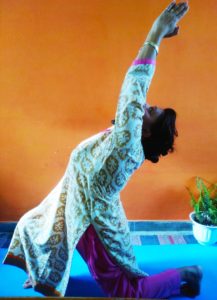 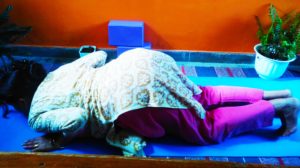 This is the eight-point salutation given by eight parts of the body. 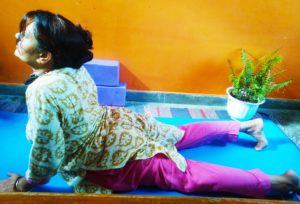 This pose gives you a perfect backbend while you lie on your stomach. When done correctly, it can gradually bring flexibility and strength to the entire spine. 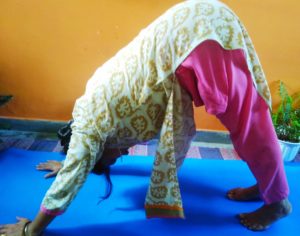 (Repeat on another side)

From Parvatasana, transition back to the ashwa sanchalanasana.

But this time, we bring the right foot forward whereas resting the left foot behind.

>>To render maximum benefits from this Holistic yoga cycle you need to complete twelve repetitions, but to boost your level of confidence and feel on top of the world, you can always challenge yourself for 108 Sun Salutations!

Butt.. not from day one.

–>Start with two cycles; gradually try to be perfect in fifteen days.

–>Preferably, try to do in the morning on empty stomach.

Through the number 108, the universe seems to create a reflection on us. This can also be seen as an utter unifying formula for oneness. We are a part of the same universe that bestows its blessings uniformly upon all of us. So how can we not be the same? All lines of divisions in the form of cast, creed, colors, status, etc seem elusive and deceptive. Through doing 108 Sun Salutations Challenge, let’s respect the universal force of creation for the sake of humanity, all creatures including.