Here is your complete guide, the health benefits and how to kapalbhati Kriya, the frontal brain cleansing technique, given by our ancient yogis… (and as explained in the most profound modern text on yoga the Hatha Yoga Pradipika).

P.S.- Once you read the post, don’t forget to watch the video on the same topic on YouTube. I have got you covered with this complete tutorial on Kapalbhati Kriya.

So What Is Kapalbhati 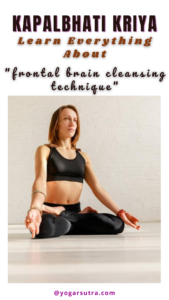 Kapalbhati is the last of the six shatkarmas

“In KAPALBHATI you need to perform exhalation and inhalation rapidly like the bellows of a blacksmith. It destroys all the mucus related disorders along with numerous other health benefits”.

Bhala and kapal both have same meaning-  the ‘cranium’ or ‘forehead.’ Bhati is ‘light’ or ‘splendor,’ but it also means ‘perception and knowledge.’

In English it is called the ‘frontal brain cleansing’ technique. It is a similar practice to Bhastrika Pranayama except that exhalation is active and more emphasized while the inhalation is passive, the result of forcing the air out.

“In a nutshell– Kapalbhati is a pranayama technique which invigorates the entire brain and awakens the dormant centers which are responsible for subtle perception”.

As described in the Hatha Yoga Pradipika, the breathing should be done like the pumping action of a pair of blacksmith’s bellows. When the bellows are closed the air is pushed out and when they are opened the air is sucked in due to the vacuum effect that is created.

Similarly, when you inhale in kapalbhati, it should only happen as a reaction to the forced exhalation.

In Bhastrika, inhalation and exhalations are equal, but in kapalbhati it is not so.

According to the Gherand Samhita there are three forms of kapalbhati:

So now let’s have a look to the:

Benefits And How To Kapalbhati Kriya

You can notice that in kapalbhati a greater number of respirations can be taken than in bhastrika pranayama because hyperventilation does not occur. It can be increased to two hundred breaths with months of practice, unless advised otherwise by your guru.

Ideally, Kapalbhati should be done after asana or neti but before concentration or meditation.

If you experience dizziness while practicing, it means you are breathing too forcefully. If this is the case, stop the practice and sit calm with slow breath.

When you restart, do it with more awareness, and with less force. Inhalation should be spontaneous and not controlled, and exhalation should not make you feel breathless before completing the round. This is important. You should feel as if you could continue breathing in this manner beyond one hundred breaths.

The effects of kapalbhati and bhastrika are similar, but due to the forced and longer exhalation, kapalbhati affects the brain differently.

Disclosure: Some of the links in this post are affiliate links. This means that, at zero cost to you, I will earn an affiliate commission if you click through the link and finalise a purchase. 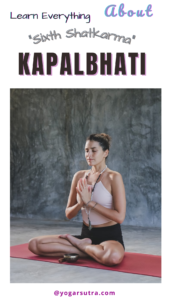 This is the mechanical influence of the respiratory cycle on the structure of the brain.

Forced exhalation in kapalbhati increases the massaging effect on the brain by enhancing the decompression effect on every exhalation.

Normally we breathe fifteen breaths per minute, means, the brain is compressed/decompressed that many times, moderately…

But in Kapalbhati Kriya, you are breathing fifty to one hundred times, stimulating the brain three to seven times more than usually per round. Kapalbhati also expels more carbon dioxide and other waste gases from the cells and lungs than normal breathing.

The Hatharatnavali clarifies these two different processes. It says,

“Fast rotation of the breath from left to right (right to left), or exhalation and inhalation through both nostrils together, is known as kapalbhati.”

Thus the two systems are correct. However, to accelerate the breath while doing alternate nostril breathing is not done easily.

The second practice of kapalbhati, vyutkrama, is similar to jala neti and is sometimes given as part of neti. Vyutkrama means ‘expelling system.’

For this practice you need a bowl of warm saline water rather than a neti pot.

Lean forward, scoop the water up in the palm of the hand and sniff the water in through the nostrils.

Practice in this way several times.

It is important to relax while sucking the water in. There should be absolutely no fear.

If there is pain in the nose during the practice it usually means that the water contains either too little or too much salt.

The third practice, sheet krama is the reverse of vyutkrama. Sheet means ‘cool’ or ‘passive.’

In this practice you take a mouthful of warm, salty water and instead of swallowing it, you push it up through the nose and let it flow out.

You have to remain relaxed and calm during the entire practice.

Vyutkrama and Sheetkrama should both be done standing rather than squatting.

Afterwards, make sure all the water is removed from the nose. 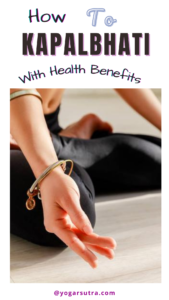 When You Should Avoid: Kapalbhati Precautions

Kapalbhati cleansing technique or Pranayama, whatever you call it, is a totally safe yoga technique to follow for everyone.

Additionally, If you suffer from heart diseases, exhale really slowly. People who have high blood pressure should first consult with a learned yoga teacher.

According to the legendary saint and yoga teacher Guru Ramdev “the people suffering from hypertension can also do kapalbhati by limiting the number of strokes to one per second”.

The point here is not to increase the strokes of Kapalbhati.

Also if you have a history of or are prone to a slipped disc or a stent, should refrain from practicing Kapal Bhati pranayama.

Kapalbhati may also lead to hernia in some cases and nausea if not performed on an empty stomach.