Learn here how to do the Trataka Kriya to raise Intuitions, improve your eyesight, and quiet the wandering mind.

Yoga has penetrated the deepest layer of mankind. Asanas or the yoga postures have emerged as the vital part of a widely used fitness tool for mind, body and soul..

Most of us are also familiar with common yogasana terminologies such as downward facing dog pose, cat and cow pose, paschimottanasana, Camel Pose to name a few.

However, the fact about yoga which is rarely known is that ASANAS OR POSTURES are only the tiniest portion of a huge pie called YOGA.

According to the Yogasutra of Patanjali, Out of eight limbs of yoga, asanas form just one.

So if you are into  yoga to have a larger than life experience through spirituality, you need to know about the koshas, the dosas, the bandhas, the Kriyas and a lot more…

Trataka Kriya, a lesser known yet extensively used term in yogic circles, is one of the shatkarmas (six yogic cleansing techniques) or Shat Kriyas.

In Hatha yoga, practice of shatkarmas is associated with making the body and mind strong and healthy.

Disclosure: Some of the links below are affiliate links. This means that, at zero cost to you, I will earn an affiliate commission if you click through the link and finalize a purchase.

What is Tratak Kriya In Yoga And Its Significance 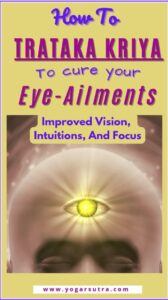 According to Hatha Yoga Pradipika,

“Looking intently with an unwavering gaze at a small point until tears are shed is known as trataka by the acharyas (teachers)”.

Trataka is an extremely powerful technique which helps us to cure and improve all eye disorders, weakens laziness and controls our mind.

Regular practice of tratak Kriya aids in directing the nervous system in a definite direction to increase our energy level.

With a quiet mind it becomes far easier to concentrate and live with tranquility.

P.S.- To cure your eyes and maintain a good eyesight, you should practice Trataka Kriya along with the Prana Mudra explain here with a video.

Trataka or yogic practice of concentrated gazing is an ancient hatha yoga exercise used for all round development of our body, mind and soul. The meaning of the word trataka is ‘’to look fixedly’’ or ‘’to stare pointedly’’. The concept of trataka is defined clearly by some yogis and old yoga texts like hatha yoga pradipika.

According to Giovanni D. from liveanddare–  in the ladder of Yoga, trataka is often considered the bridge between the body-oriented practices – like postures (asanas) and breathing exercises (pranayama) – and the mind oriented practices of meditation (dhyana) and the superconscious state (samadhi). It is also an essential preparation for all visualization-type meditations. 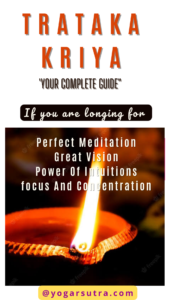 Conventionally there are three kinds of trataka that can be practiced:

This is done with closed eyes with the imagination that we are gazing at either the midpoint  of our two eyes(bhrumadhya drishti), or heart, navel or any other internal organ.

Madhya (in Between) Trataka

In this method, still gaze is fixed on the center of the eyebrows (bhrumadhya) or tip of the nose(nasagra)or any nearby object made of any material.

Alternatively, it can be practiced with aum written in paper, or concentric circles having a black dot in its middle, or a single black dot with open eyes.

It is performed by fixing our gaze on a distant object like the rising Sun, Moon or a bright planet. Bahiranga is simpler to practice than Antaranga because you just have to gaze at an object or symbol.

How To Practice Trataka For Maximum Benefits

As we understand by now that the practice of trataka is done by gazing at a fixed point or object without blinking the eyes.

Using a steady flame is often preferred because the flame acts as a natural attraction for many people.

Fire may play the role of a magnet for the eyes and mind.

Also, it leaves a very clear after-image in the mind.

The principal objective of trataka is firstly to silence the wavering tendencies of the mind to achieve the highest degree of focus and concentration. Secondly, to harbour the power of intuitions and inner visions.

Once the thoughts and power of your mind becomes streamlined, the flow of prana happens effortlessly,  making life completely stress-free…

Your faculties are awakened naturally

In my book “Behind Your Brain Beyond The Books” I have explained everything to control your mind and achieve the highest degree of focus through yoga. Trataka Kriya is also explained perfectly.

How To Trataka Kriya To Raise Intuitions, Improve Eyesight And Quiet The Mind

if the eyes become sore or tired.

Other Symbols And Objects You Can Perform Trataka Effectively 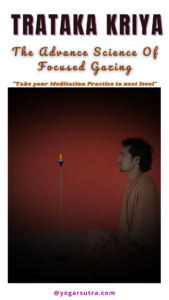 There are other equally effective symbols or objects such as a crystal ball, a shiva lingam, yantra, mandala, full moon, a star, the rising or setting sun (when it is an orange-red ball and not yellow), a Chakra symbol of Om, or your own shadow. These are the most effective.

Trataka can also be done on a rose, a tree, a mountain, the sea, or lightning.

In fact, if you worship a particular deity and gaze steadily at the form, it is also Bahiranga Trataka.

But please note that the most suitable of all forms is a steady flame because a symbol, yantra or mandala leaves an impression in the mind and stimulates particular centers.

For example, If you concentrate on Kali, the dark Goddess (a ferocious avatar of maa Durga from holy trinity) you may arouse that aspect of your inner being!

Even some yoga scriptures state that, you may even manifest Kali and be terrified by her fearsome form!

Therefore, a steady flame of light is most practical unless the guru says otherwise.

Preparing Your Eyes Before And After The Tratak Kriya

You can perform the following eye exercises before and after your “gazing meditation” aka Trataka. I personally love this practice of eye-toning and do it regularly.

Keeping your head completely still, move your eyes left and right ten times; then up and down ten times; then make full circles in the clockwise and then counter-clockwise direction, five times each or so. Finally close your eyes for 10 minutes and cup with your palms.

This is a good exercise for the eye muscles, and some teachers recommend it as a preparation for gazing meditation.

Research  shows that there is a definite relationship between eye position and the dominant hemisphere of your brain; so much so that changing the eye position can directly affect your mood and experience of the world. In the experiments, pictures appearing on the left side of our viewing field, and sounds in the left ear (both transmitted to the right brain), are perceived less agreeable than when they are presented to the other side.

This is relevant because the technique of Trataka involves holding a central gaze. This can explain the experience of many practitioners regarding Trataka meditation and similar techniques  leading to an integration and unification of the whole brain.

Clinical studies on Trataka indicate that it works on removing all kinds of neural disorders and blockages and it also assists an individual in gaining deep concentration and meditation.

The practice of trataka is very conducive in gaining control on our parasympathetic nervous system, lowering of heart and respiration rate.

It increases the peripheral blood circulation of our body.

By removing the emotional clutters, the trataka Kriya helps in mastering our mind.

Most Popular Reads You May Love Too!

Kundalini Pranayam For Stress-Relief And Insomnia

How to use yoga blocks for back pain and stress relief

How to use yoga wheel

What does your favourite colour predicts about you

It promotes the purification process by eliminating our suppressed emotions and desires from the subconscious level.

To sum up, the practitioner of Trataka experiences a great deal of relaxation and highest degree of calmness and peace on both physical and mental level.

and press the bell icon

to get notified for the new releases on Chakra system and more.