The ancient Yogis discovered it-
THE SOURCE OF THE ‘FOUNTAIN OF ETERNAL YOUTHFULNESS’! As an average human being we often dream of it! According to the yogic science, Bindu Chakra has this unique property to provide you with an endless stream of youthfulness so that you can live an illness free life! So, Why is it very crucial to activate Bindu Chakra ?
Because,
“The Sun is in the navel and the moon in the head. The nectar that comes from the moon is consumed by the sun, and the life force is gradually used up in this way. (Gheranda Samhitā, Verses 28-30)

“When I come onto the earth, I preserve all beings through my life-giving power. When I become the nectar-giving moon, I nourish the vegetation.”

Don’t want to read? Watch this video on “How to activate your Bindu Chakra, the fountain of eternal youthfulness…”

So What Is Bindu Chakra 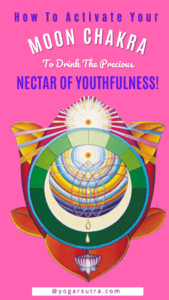 Bindu means a point or a drop, Chakras stand for the body energy centres.
Bindu Chakra is located in the middle of the Sahasrara and Ajna Chakra. Ajna Chakra is very small and Bindu Chakra is even smaller than the Ajna Chakra– “the Third Eye Chakra”.
In spite of being very tiny and dormant usually, its influence is unimaginable when it’s activated through various yoga kriyas and postures…
When this energy centre is inactive, it is just a dot. But once awakened its energy begins to flow or to “drip”.
This is when the Bindu Chakra produces truly astonishing effects by improving your physical, psychic and spiritual health.

Symbol Of The Bindu Chakra

The symbol of the Bindu Chakra is the MOON; therefore it is also known as Chandra Chakra (Moon Centre).

In deep meditation, the Bindu Chakra appears to have a circular opening with a lid almost completely covering it, and from this some light shines forth through a small gap.
This sparkling light is the projection of the radiance of the self in the Sahasrāra.
It is similar to the slender crescent of the new moon.
A fully awaken Bindu Chakra shines brightly with a silvery sheen, like the Full Moon.

The moon is also a symbol of perfection, nectar and energy. Nature receives life-sustaining Prāna from the moon allowing everything to grow and thrive, as moonlight is also essential for the growth of plants and the ripening of fruit – not only sunlight.

Physical Location Of Moon Chakra In Our Body

Most of us love the very aspect of balancing the seven major chakras while Bindu Chakra remains unnoticed. Perhaps working on this Chakra is seemingly complicated and its insignificant size.
Physically, the Bindu Chakra resides beneath the cowlick that is generally found at the back of our head. A *cowlick is a small section of hair that grows at a different angle than the rest of the hair on your head. Hair cowlicks are caused by genetics and are typically located at the crown of your head.

The direction of the stream of cosmic energy flowing into the Chakra can be seen quite clearly at this point.
Having two cowlicks indicates the existence of two energy centres. This is a sign of exceptional vitality and creativity, but it could also be a pointer of hyperactivity and extreme nervousness.

*The name cowlick comes from the swirled effect left in the hair of baby cattle after being licked by their mothers.
On the physical level this also means that with the awakening of the Bindu Chakra the Pineal Gland, which is connected to this centre, becomes active. This gland secretes a hormone that has a “fountain of youth” influence on both body and mind. This is why the Rishis gave it the name “Amrita”, nectar of immortality.
The more active the Bindu Chakra becomes, the more abundant this precious Amrita flows.

Most Astonishing Facts About The Bindu Chakra 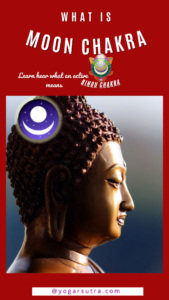 The most wonderful aspect of the Bindu Chakra is the continuous drizzling of AMRITA, the nectar of immortality. According to the ancient scriptures- “just one concentrated drop is sufficient to make new shoots grow on a piece of dry wood, and bring a deceased back to life”.

According to the Sadguru, the world famous preacher, mystic, philanthropist (and more)..” the Bindu Chakra is a particular spot on the pineal gland surrounded by a certain secretion. If you touch the bindu, it will release secretions that make your body comfortable and make you feel ecstatic. To activate the bindu, there is a certain point at the back of your head.
Many cultures around the world have recognized this, and there is an understanding that that point needs to be protected and activated,”.

In Hinduism, when men shave off their hair owing to a spiritual journey, they spare some hair at this point in the form of a tuft.
In other parts of the world and cultures, people involved in a spiritual activity such as worshipping or going to a Temples, Churches or Mosques, cover their head using a scarf or a small cap.

In Āyurveda this life-giving nectar is also known as Sanjīvani Vati ( a medicine that infuses life). There are Yogis who have power to overcome the bodily needs called hunger and thirst. They are said to be nourished by the nectar from the Bindu Chakra.

The Bindu Chakra is not mentioned in most of the yoga books, but in Tantra Yoga ( a form of yoga practice that’s aligned with tantra, an ancient spiritual practice), great importance is given to the healing and rejuvenating effects of the Chandra Chakra.

Psychological Benefits Of The Bindu Chakra

” By Bringing a balance in your Bindu Chakra, Mental chatter is entirely silenced so you can experience a sense of complete well being”.

It is very common to fill our hearts with sadness and oppressive feelings. But meditating on this Chakra can remove these emotions as well as depression, nervousness and anxiety.
A gentle fingernail pressure upon the Bindu Chakra stimulates the feeling of instantaneous happiness.
Even a crying child can be consoled by a gentle massage on the Bindu Chakra. That said, the Bindu Chakra has the power to treat you Psychologically!

Hence if we were able to utilise this life potion for our body, we would live longer with perfect health!

However,
With certain Yogic practises we can be successful in catching the drops of nectar in the Vishuddhi Chakra a.k.a. Throat Chakra– for nourishing the body.
The Vishuddhi Chakra is responsible for the purification and detoxification when an imbalance occurs in the body due to toxic substances.

We know that this body is perishable; this is the truth; then why there’s a constant longing for youthfulness and longevity?

The fact that Ātmā is immortal, but lives inside a mortal and fragile body. But people longing for moksha, a.k.a., liberation for the spiritual realisation, always emphasized to keep the body healthy and complete their spiritual journey within the current lifespan!

The only way to attain the moksha while living in our own body, is to keep it glittery and healthy. And this is why the Rishis discovered methods by which this valuable nectar could be gathered within the body and its benefits utilised.
They found that they could control the flow of nectar with the help of the Vishuddha Chakra and the tongue. The tongue houses subtle energy centres, corresponding to a specific part of the body or organ.

How To Activate Bindu Chakra

To activate Bindu Chakra, you can effectively catch this precious nectar with the tongue with the following yoga mudra and postures: 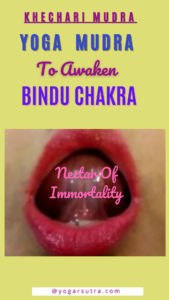 The well proven technique through which we can activate the Bindu Chakra is known as Khecharī Mudrā , which is described in the Hatha Yoga Pradipikā.
In khechari mudra the tongue is rolled back as far as possible until the tip of tongue reaches deeply into the Pharyngeal cavity.
This results in the dripping of the nectar down from the Bindu Chakra and is trapped in the throat Chakra.

But the problem is that rolling the tongue for that long and up to that point is not an easy task for a Yogi in process… like we.

The benefits of Khecharī Mudrā can be magnified by performing it together with Ujjāyī Prānāyāma and Jālandhara Bandha (Chin Lock).

Ujjāyī Prānāyāma is a breathing technique which emphasises the throat-breathing.
The throat is contracted slightly so that the air flowing through it produces a soft sound, similar to snoring while in deep sleep analogous to the sound of ocean waves.
Through the Jālandhara Bandha the flow of energy is briefly locked to constrict the Prāna in the Vishuddha.

Mantras Of The Bindu Chakra

The moon is the symbol of Lord Shiva- The Adiyogi, and the Mantra to simulate the Bindu Chakra is,

“OM my adored One, the three-eyed Lord Shiva , who is omnipresent
May He nurture us and bless us with health
May His blessings liberate us and lead to immortality”.

This Mantra is known as MAHĀ MRITYUN JAYA MANTRA – the glorious Mantra of victory over death.

Most Popular Reads You May Love Too!

Kundalini Pranayam For Stress-Relief And Insomnia

How to use yoga blocks for back pain and stress relief

How to use yoga wheel

What does your favourite colour predicts about you

Wrapping Up- How To Activate Bindu Chakra

Desire for ever-young looks isn’t a superficial human greed. On one hand, being young means leading an effortless healthy life.

When you are young you have everything at place.

May it be the physical health or the mental,they together start decaying as the wrinkles on the skin begin to sprout, with each greying hair.

As we age, most of our hormonal glands slow down to produce less than required amount of hormones. Which are essentially required for the efficient functioning of each organ and organ system.

Even if you dismiss all these privileges of being young once , you would never dream of housing a torn and weary body. Because with this body you can’t attain moksha (liberation) from the vicious cycle of death and birth.

For any goal to achieve you need a strong body.

With an open Bindu Chakra you can also witness an improved eyesight better awareness due to awakening of the pineal gland, inner harmony and emotional balance.

This Chakra also balances hunger and thirst, promoting healthy eating habits. It may relieve anxiety and depression, and expands creativity and imagination.

Thanks for reading this line. If you want to learn the most correct way of doing any yoga posture👇

If you are new to my YouTube channel please 🌺subscribe 🌺and press the bell icon 🔔to get notified for the new releases on Chakra system and more.