Do you often feel surprised when you see Yogis sitting in a lotus pose with various geometry of their palms… specially fingers? Learn here everything from the origin to the philosophy and the science of Yoga Hasta Mudras.

But… Gestures Are versatile!

Gestures were here even before the development of the vocal languages. All the creatures indulge in some kind of body language which is synonymous to gestures.  Most animals communicate with others by – scent-marking a path, scratching a tree or vocalising to troop members. Usually these forms of communication are to warn another of impending danger or to mark a territory. Gestures and postures are also used in mating rituals and may include  bright colours displays. Facial expressions are  used to convey information mainly in primate- our close relatives! 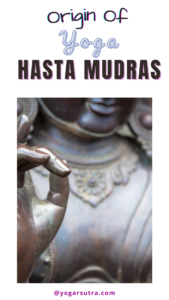 Yoga hasta mudras are said to have originated in India most likely in Gandhāra.

However the accurate origins of mudras are unknown although they’ve been present for thousands of years and have appeared in varying religions and traditions including Hinduism, Buddhism, Christianity, Egyptian hieroglyphics, Tantric rituals, Roman art, Asian martial arts, Taoism and Indian classical dance.

A large number of religious icons of the Orthodox Christian Church depict Jesus, Mary, and the other saints performing hand-gestures which correspond exactly to specific yoga mudras. This suggests that meditation using yoga mudras may have formed an essential part of the spiritual practices of the early Church.

In Hatha Yoga Pradipika,  bandhas and mudras are treated in conjunction and the ancient tantric texts also make no distinction between the two.

Bandhas aka Yoga Locks are extensively incorporated in mudra as well as in Pranayama techniques. Although, the locking action reveals them as a most crucial fundamental practice in their own right.

Yoga Hasta Mudras And Their Meanings

“The word “mudra” is derived from Sanskrit word Mud + Dhra or bliss dissolving, meaning that which dissolves duality and brings the deity and devotee together.

Mudras are hand, body, or eye positions that facilitate certain energy flows in the body and by forming a specific mudra one can induce certain states of mind and consciousness.

In Yoga,  mudras are accomplished with hands, eyes, and… even the entire body, known as yoga posture.

When a mudra is done using your hands, specially the palms and fingers– is known as a  Hasta Mudra or Hand Gesture.

All forms of mudras work in harmony with other healing methods. Hasta Mudras when done regularly,  can have wonderful healing effects on your body, mind and soul.

Therapy with mudras offers very effective results. It works through the energy system of the body – NADIS, CHAKRAS, MARMAS.

Ancient Vedic wisdom says that “your health is in your hand“.

Which is literally when it comes to the plethora of benefits offered by the practice of the hasta mudras.

In our hands, four fingers and the thumb represent the five major building blocks or the ‘Panchamahabhutas’ of which the entire universe is made. These mahabhutas are: Sky (Ether), Air, Fire, Water and Earth.

Usually, these five elements live in harmony and balance within the body.

According to Ayurveda, diseases are nothing but an imbalance of these five elements.

That said, we remain healthy as long as all these elements are in a balanced state. An imbalance in these mahabhutas can cause various health issues and diseases. Some common diseases caused by each of these elements are:

Therefore, it is very important to maintain the appropriate balance of the five elements for a healthy life. And this ancient Indian discipline and a branch of Yoga known as Mudra Chikitsa is extremely helpful in that regard.

Functions of The 5 Elements Within The Body 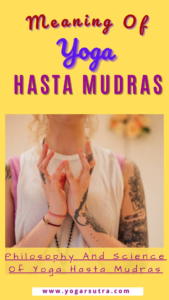 According to Ayurveda, the sister science of Yoga, each of the five elements is responsible for different functions and structures in our body-

It is responsible for all movements like expansion, contraction, breath.

It creates heat and derives our needs like hunger, sleep, and thirst.

It forms solid structures like- bones, tissues, skin and hair.

It is responsible for our inner wisdom and intuition. It also determines our fears.

Mudras or these mystic hand gestures engage certain parts of the brain and offer a corresponding influence on them.

Practising various Mudras during your yoga practice develops a connection with the brain patterns that affect the unconscious reflexes in different parts of your body. Furthermore, the Mudra balances and redirects your internal energy, which influences your tendons, glands, veins, and sensory organs.

The use of mudras balances the natural flow of energy in our body. So when you make a mudra, the tips of your fingers create an energetic circuit that adjusts the flow of energy in your body by balancing the related element. Each finger on either hand balances a specific element.

How The Fingers Geometry Works

According to the Yoga Tattva Mudra Vigyan, there are three basic effects of practising various mudras:

When the tip of the thumb touches the base of a finger, it will increase the element associated with that particular finger. For example, touching the thumb to the base of the middle finger will strengthen the space element.

When a finger is covered by the thumb, it causes the suppression of the element associated with that finger. For example, covering the ring finger with the thumb weakens the earth element.

“Hasta mudras can be practised seated, prone, standing or even walking, as long as the posture is symmetrical and the body is relaxed.

Mudras can even be done during illnesses. Even while lying in bed… As long as you are aware of your breath and can move your arms, hands and fingers freely!

Mudras can be practised for up to 30 minutes a day, either in one go or divided into three 10-minute periods.

These mudras help to focus the mind in meditation and streamline the flow of energy during asana practice.

For the great and quicker results from hast mudras, you should practice them daily at a specific time of the day.

Mudras that are used for acute complaints, require to be discontinued after the desired healing. 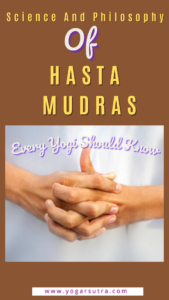 Yoga Mudras are great for personal growth and they can be done in a yoga retreat, meditation retreats and of course at your daily home practice. The good thing about Yoga Mudras is that they only require hand gestures, which means that there is not much physical activity and time involved.

You can reap maximum benefits by practicing a hast mudra by devoting just 20 minutes a day.